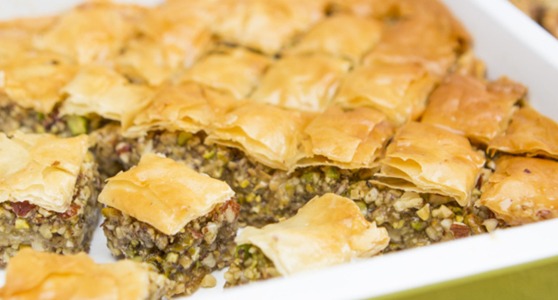 When thinking of a recipe to share for Mother’s Day, we couldn’t go past the Greek classic – Baklava. Sweet and crunchy, this popular Greek dessert is the perfect treat to make with Mum. And who better to give us their tried and tested recipe than the Greek Ladies Philoptochos Society of St George Brisbane. A special thanks to Angela Tumini and Emilia Christoforou for sharing their processes and expert tips with us. We hope you have fun making this recipe and we would love to see your creations. Share your baklava photos on Facebook or Instagram and #thegreekclub.

Want to change it up? Why not try traditional Poura instead. You will the same almond mix and syrup as the Baklava, but the magic difference lies in the filo.

Sign up to receive the latest news and offers from The Greek Club.